The annual Granlahan sports day is on Sunday 24th July. A great day out for all the family at Granlahan community centre. 2.30pm
at 1:53 pm No comments:

Article by Billy Phillips from the Roscommon Herald

A PIECE of history was made recently when the girls from Granlahan National School won both the ladies soccer schools’ competition and the Cumann na mBunscól Gaelic football competition.

The soccer final was played in the grounds of Donamon Castle. It was a very tight and keenly contested affair. In the end, the Granlahan girls enjoyed a narrow 1-0 victory over an extremely skilful team from Ballintleva National School.

Both teams created a number of goal chances. Near misses were also the order of the day while both goalkeepers made a number of outstanding saves. A marvellous solo effort by Granlahan centre-forward, Ann Marie Heneghan, midway through the first half ended with a superbly-taken goal. Despite the closeness of the exchanges, this was a game played in a great spirit of friendship and sportsmanship.

A loud cheer went up when Granlahan captain, Amy Brady, accepted the shield from the manager of Londis supermarket, Roscommon. Full credit must go to Mr Martin Conboy alongside his referees and officials for the efficient organising and running of the competitions, especially the finals. The victorious Granlahan girls returned to their school and a great welcome from their friends, parents and teachers.

A large crowd of parents, children, past-pupils and supporters made their way to Dr. Hyde Park, Roscommon a few days later to cheer on a highly fancied Granlahan girls side in the final of the Cumann na mBunscól Two Teacher football final.

The setting was perfect blue skies, sunshine and the pitch was in immaculate condition for football. Granlahan were physically much stronger than their skilful opponents from Ballagh National School.

This was Granlahan’s second year in a row to reach the county final. Their extra strength and experience made a huge difference and by half time Granlahan had crept into a commanding lead. During half time, a number of positional and personnel switches were made by both schools. As a result, the second half proved a much closer contest. Ballagh put in a huge effort, worked tirelessly and scored some excellent goals and points.

However, the teamwork and football skill of the Granlahan girls won the day on a final scoreline of 12-14 to 7-11. The Cumann na mBunscól trophy was presented to the captain of Granlahan, Michelle Neenan by the secretary of Cumann na mBunscól, Madeline O’Connell. In her speech, she complimented the skill level and sportsmanship of both teams.

She also commended them on their fine scoring and fair play. A huge cavalcade of cars wound their way westwards where the team were paraded around the parish. Onlookers, flags, banners and bonfires greeted their arrival in Granlahan.

A presentation of medals followed and a party also took place. Children and supporters celebrated this victory in great style at the school. The match and celebrations will live long in the memory of these young girls.
at 11:32 pm No comments: 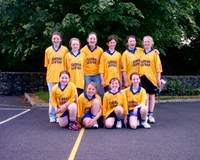 The Lake O'Flynn Angling Association held its annual Garvey Cup Fly Fishing competition, in association with the Stonehouse Restaurant and Bar, Ballinlough, on Lake O’Flynn on Sunday, June 19th.The competition was very well supported as usual with 22 boats and 44 anglers competing. Main prizewinners were as follows: 1st and Garvey Cup winners for 2005, Michael McDermott and Gerry Warde, Castlerea; 2nd, Jackie Coyne, Culfin & Tom Sullivan, Cornamona; 3rd, Gary Binley, Foxford & John Moroney, County Clare; 4th, Feichin McMorrow & Feichin McMorrow (jnr), Sligo. Best Junior Angler and winner of the Fly Rod was Ronan Baggott, Ballinlough. Heaviest fish prize went to Gary Binley, Foxford. The club would like to thank Mr Ray O’Connor, Stonehouse Restaurant, for being the mains sponsor of the event and for making his premises available for the presentation. A special word of thanks to the Mannion and Garvey families, Castlerea for assisting at the weighing of fish and providing refreshments.
at 4:08 pm No comments:

Ml Glaveys U12 in Final

The u12 team from Michael Glaveys will be playing in the County final in the next few days - venue and date to be confirmed.
at 4:06 pm No comments:

Email ThisBlogThis!Share to TwitterShare to FacebookShare to Pinterest
Granlahan Mural : A small section of the picture is shown here. 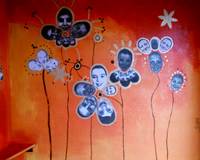 Email ThisBlogThis!Share to TwitterShare to FacebookShare to Pinterest
GRANLAHAN NS was fortunate to receive approval from Roscommon County Council to host an Artist in Residence Programme in the school during the months of May and June.

Local artist, Clea van der Grijn and the children painted a huge mural in the school shelter. Photographs of the children were incorporated into flowers and formed a central part of the mural. All the children in the school were involved in each stage of the project. A steady stream of visitors and parents called to see the work in progress. On Friday, June 24th the project was officially opened by Rev. Fr. J. Feeney P.P. in the presence of artist, teachers, members of B.O.M. and parents. The completed art project has received much favourable comment and adds great colour and artistic focus to the school grounds. Granlahan NS Board of Management would like to acknowledge the support of Roscommon County Council Arts Officer Mr Philip Delamere, for supporting the project from the outset 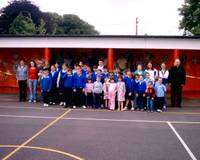 The girls of granlahan school recently won county competitions at Gaelic Football and soccer.
They won easily in the football final in Dr Hyde Park - Roscommon. They also beat all the opposition in the county 5 a side soccer. Well done to the girls.
at 3:49 pm No comments: